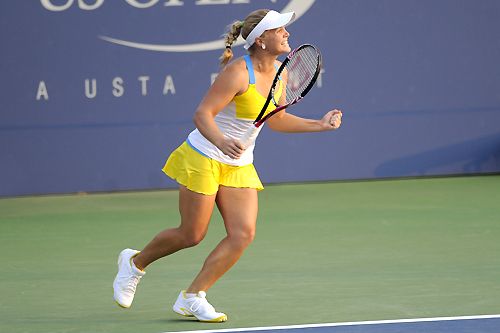 Oudinearned a wildcard to the event but shocked the community when she knocked out four Russian tennis stars in a row. She ousted Anastasia Pavlyuchenkova first then doubled it against Elena Dementieva. When everybody thought she had met her waterloo in Maria Sharapova, she dusted the star. She then saw off competition against Nadia Petrovato earn cult following and endless admiration. She couldn’t get past Caroline Wozniacki though, but at least she wasn’t Russian. END_OF_DOCUMENT_TOKEN_TO_BE_REPLACED

For the main draw at this year’s tournament in Roland Garros, a wild card into Bogota might have helpedFrancesca Schiavone, former French Open champion to qualify.

So far into the season, the 2010 French Open champion had gone on without a single win in any match which thus saw her drop down in the rankings to No. 168. However, all she needed was to ask for a wild card which would allow her participate in the small WTA International tournament held in Bogota.

She received a wild card eventually and paved her way through to defeat three of the tour four seeds. In the final, she completed the journey by taking down an injured Lara Arruabarrena.

After emerging victorious, the 35-year old Italian leapt up and down the court and spoke to the local press, comparing this victory to that of her biggest career win back in Paris.

She said; “In this moment I have memories of my championship in Roland Garros. I have always had very good performances on clay. It was too long since I won a title and I am very pleased to win again. END_OF_DOCUMENT_TOKEN_TO_BE_REPLACED

Despite the rumors that female tennis star Francesca schavione was considering retirement over the off season, the player has come out to debunk the news and announce that she’ll continue with the game and feature at the WTA tour spanning through 2017.


The champion of the 2010 French open has proceeded to express great enthusiasm and desire to continue playing the game through the 2017 season. After finishing in the top 20 for the fourth time and the last five years of her career, schavione took to her official Instagram page to spread the news.

“I still feel like I have the desire and enthusiasm to try and do something in what is perhaps the one thing I’m best at, playing tennis. Now don’t start asking me if this will be my last year!!! See you in Australia,” the post read.

She had previously announced that the end of the year 2016 will bring with it her final season, but had apparently begun reconsidering her decision to quit during the last winter. The always cheerful and entertaining Francesca schavione engaged her fans in a colorful journey during the offseason. She had set up a web series asking her followers all over the world to select a suitable career in which she could engage in, with tennis being among the list. END_OF_DOCUMENT_TOKEN_TO_BE_REPLACED According to Schiavone, quite a few players, who are almost of the same age or maybe just a tad younger than her, are still being active in the professional circuit and they are actually doing quite wonderfully, the likes of Serena and others. So, if they can maintain their bodies in good shape and keep going, there is no reason why she can’t continue. END_OF_DOCUMENT_TOKEN_TO_BE_REPLACED

Whenever Francesca Schiavone and Svetlana Kuznetsova meet, one thing that you can be absolutely sure about is that you would not get bored as there would be some majestic tennis on show. It seems these girls have got the measure of each other. There would rarely be a one sided match when they are on the court.

Yesterday’s outing in the French Open was no exception either. It went all the way down to the wire yet again. In the third and final set, Kuznetsova came close to winning the match on numerous occasions, but, her veteran opponent was just not ready to throw the towel in. END_OF_DOCUMENT_TOKEN_TO_BE_REPLACED