The Italian professional tennis player Roberta Vinci, in May after the Italian Open, said she is not sure what she is doing to do after waving goodbye to the pro tour. 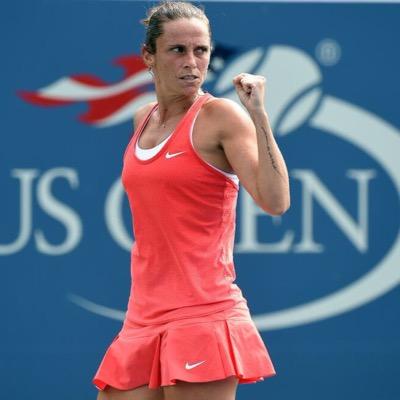 The finalist of 2015 US Open doesn’t have in mind plan to become a commentator, but she has a good amount of interest in coaching. Vinci said in an interview, “Rome will be my last tournament. In case I reach the Top 10 again ranking again, this will be my last tournament for sure. At present I focus on the coming next six months, but this is not like I will leave tennis, I will certainly keep working with the sport”.
END_OF_DOCUMENT_TOKEN_TO_BE_REPLACED

Monica Piug, No.4 seedsurvived a stern opening-round test as she fired down, powering past WTA veteran Francesca Schiavone 6-4, 7-6(4) at the AbiertoMexicanoTelcel. Speaking before the tournament, Piug who is Latin American’s America’s No.1 player talked about how playing in Acapulco felt a little bit like home.

The Puerto Rican said:“I’m really happy to have the beach right there – it’s in my blood, I’m from the Caribbean so I really like it,”

“I’ve played in Mexico several years, starting from Juniors until WTA. For me, this tournament is one of the most comfortable.”

Despite starting strong and coming off with a break in the opening game, Piug looked decidedly less comfortable as she battled it out against 2010 French Open champion Schiavoneon Cancha Central.

The Puerto Rican was largely frustrated by the tricky, deliberate and one handed backhand tactic employed by Schiavone. However, in the first set, the Italian veteran was unable to take any of the three break chances she created. END_OF_DOCUMENT_TOKEN_TO_BE_REPLACED

Justine Henin reckons if there had not been someone like Clijsters who gave her vicious competition, she might have ended up as a lesser player.

Henin was a guest in an ATP programme organised in the honour of her as well as one other former male Tennis player Marat Safin a fortnight back and she delivered an impressive speech on that occasion. END_OF_DOCUMENT_TOKEN_TO_BE_REPLACED

There is no guarantee of Rafael Nadal taking part in this year’s last Grand Slam i.e. the US Open. His coach Toni is not sure whether the injury that the world no. 2 established while practicing a few days ago would heal in time or not.

According to Toni, Nadal will go through a scan 7 or 8 days ahead of the tournament and his participation at Flushing Meadows will depend on the result of that scan.

Talking to a Spanish website the other day, Toni said, “It all depends on MRI. We might go there, we might not go there. We don’t know at this point of time. But, it’s certain that Rafa will participate only if 100% fit, otherwise not.”

Because of this recent injury of his, Nadal has withdrawn from the ongoing Rogers Cup and he is not believed to be going to take part in the upcoming Cincinnati Masters tennis tournament either. He had won both these tournaments last year.

Toni admitted that Nadal’s feeling low after having missed the opportunity to defend his crown in Toronto. He was quoted as saying, “You always get a bit demoralized when you suffer an injury ahead of an important tournament. This injury has come at a very wrong time for Rafa. He won’t be able to go either to Toronto or to Cincinnati and he’s obviously low because of that.”

Nadal who got removed from the world no. 1 position after his early exit from Wimbledon has had a decent 2014 season. He has won a Grand Slam i.e. the French Open, while; he has reached the final in another one i.e. the Australian Open. He would surely be happy to add one more title to his tally this season and there can’t be a better place to do that than Flushing Meadows.

Stanislas Wawrinka’s wonderful journey in the Aegon Championships ended yesterday as he got beaten by Grigor Dimitrov of Bulgaria in the straight sets in the semi final round. Dimitrov won the match by 6-2, 6-2.

This result was kind of unexpected despite the fact that Dimitrov had been in fantastic form in the tournament. It was being thought that he would find it very difficult to match Wawrinka who has been one of the most in form players on the tour this season, but, the Bulgarian showed that anything is possible if you are determined. He brought out his ‘A’ game on the big day and sent Wawrinka packing.

Wawrinka who is the third ranked player in the world was terribly frustrated at the end of the match and he broke his racquet out of frustration. One can understand that feeling of his though. This title just before the Wimbledon Championships would have boosted his confidence big time, but, he lost the opportunity.

Wawrinka and Dimitrov had faced each other a couple of times before as well and in both those contests, the later had been completely outplayed. But, neither of those two games was on grass courts. It’s the first time that these two were up against each other on grass and Dimitrov showed his potency on the green surfaces.

Both these players had been beaten in their opening round matches at Roland Garros and thus, it was important for them to do well at Queen’s Club to go to the All England Club being positive. Both would have preferred to win the title, but, now, it’s only Dimitrov who can do it.

The Bulgarian will have the Spaniard Feliciano Lopez as his opponent in the final match. If he defeats him and wins the title, it will be the 4th singles title of his career.

Francesca Schiavone will take on Yaroslava Shvedova of Kazakhstan in the opening round of the upcoming Sony Open tennis tournament.

The Italian player has suffered a lot of losses in the recent past. But, in the BNP Paribas Open which was played just about a week ago, she showed a little bit of form which is a good thing. Also, her head to head record against Shvedova is quite encouraging. She has beaten the Kazakhstani in all the matches that she has played against her so far.

As far as Shvedova’s recent outings are concerned, they have been quite good. The 26 years old player who is currently ranked 64th in the world has hinted that she is slowly getting back into her shape.

The last couple of years have not been great for Shvedova in terms of fitness. She has struggled with a lot of fitness problems and at one point, it even seemed that her career might be over before time because of the injuries, but, she showed the fighting spirit and the will to come back and she did manage to come back.

Now, she has a good chance to break her losing streak against Schiavone with the Italian not in the best of forms.

The player who wins this match will have to face the most destructive female player on the tour i.e. Serena Williams next which is going to be very hard.

But, that’s a different story. The two players would be thinking about the job that is in their hands at the moment and not about whom they will play against in their next match.

However, it’s almost certain that whoever gets through to the second round would have to suffer defeat against Serena as the American is probably in the form of her life.